A Message from Alan Eustace on his 5 Year Anniversary:

On October 24, 2014, Robert Alan Eustace, Senior Vice President of Knowledge at Google, along with the help of UPT, set the world record for the highest-altitude free-fall jump. Eustace made his jump from the stratosphere, setting the new world record at 135,889.108 feet (41.419000 km; 25.7365735 mi), thus breaking Felix Baumgartner’s 2012 world record. Eustace, in his pressure suit, hung tethered under a helium balloon on his ride to altitude, and used an explosive device to separate from the balloon. Today, on the five year anniversary of his record-breaking jump, Alan shared some kind words about our team’s involvement in the project. For those of you who do not receive the Skydiving Museum & Hall of Fame emails, we would like to share his words with you here.

When I left the stage after my induction speech Saturday evening, I realized with a panic that I forgot to thank the one person, and the one company, that were primarily responsible for me getting this prestigious honor: Daniel “Blikkies” Blignaut and United Parachute Technologies (UPT). I resisted the urge to jump up and steal the microphone from the next inductee, but it was one of the worst moments of my life. Thank you to the International Skydiving Hall of Fame Board for allowing me the opportunity to send this message and right this terrible wrong.

During the course of the 3 year project, Blikkies went from parachute supplier, to consultant, to teammate, to friend, and finally to family. He is the brother I never had. Blikkies is incredibly creative – the best problem solver, engineer, and builder that I have ever met, and I managing Google engineering for 12 years, and have met some really great engineers. I quite literally trusted him with my life. His contributions were not just in the parachuting area, but they extended to all aspects of the system. He not only saved my life through great engineering, but he was the leader of the safety diver team for the airplane jumps, and opened the parachute for me on the first airplane jump, when I couldn’t. His dry sense of humor also helped on the emotional side. When I was completely physically and emotionally drained from a test, Blikkies would smile and say “Alan, this isn’t band camp”, and we’d both break up laughing. There is no way that I could have broken the record for the highest parachute jump without him.

As a token of my incredible appreciation for Blikkies, Bill Booth, Mark Procos, and the team at UPT, I’d like to announce that I’ll be making a $100,000 donation in their name to the International Skydiving Museum & Hall of Fame. When the museum is completed, I’ll also be donating the Spacesuit replica, so that future generations can view the work of this remarkable man, UPT, and the entire StratEx team.

The team at UPT is incredibly proud to have been a part of the StratEx project, and equally proud to call Blikkies a member of the UPT family! We also would like to say congratulations to Alan Eustace, and all of the other 2019 Hall of Fame inductees! 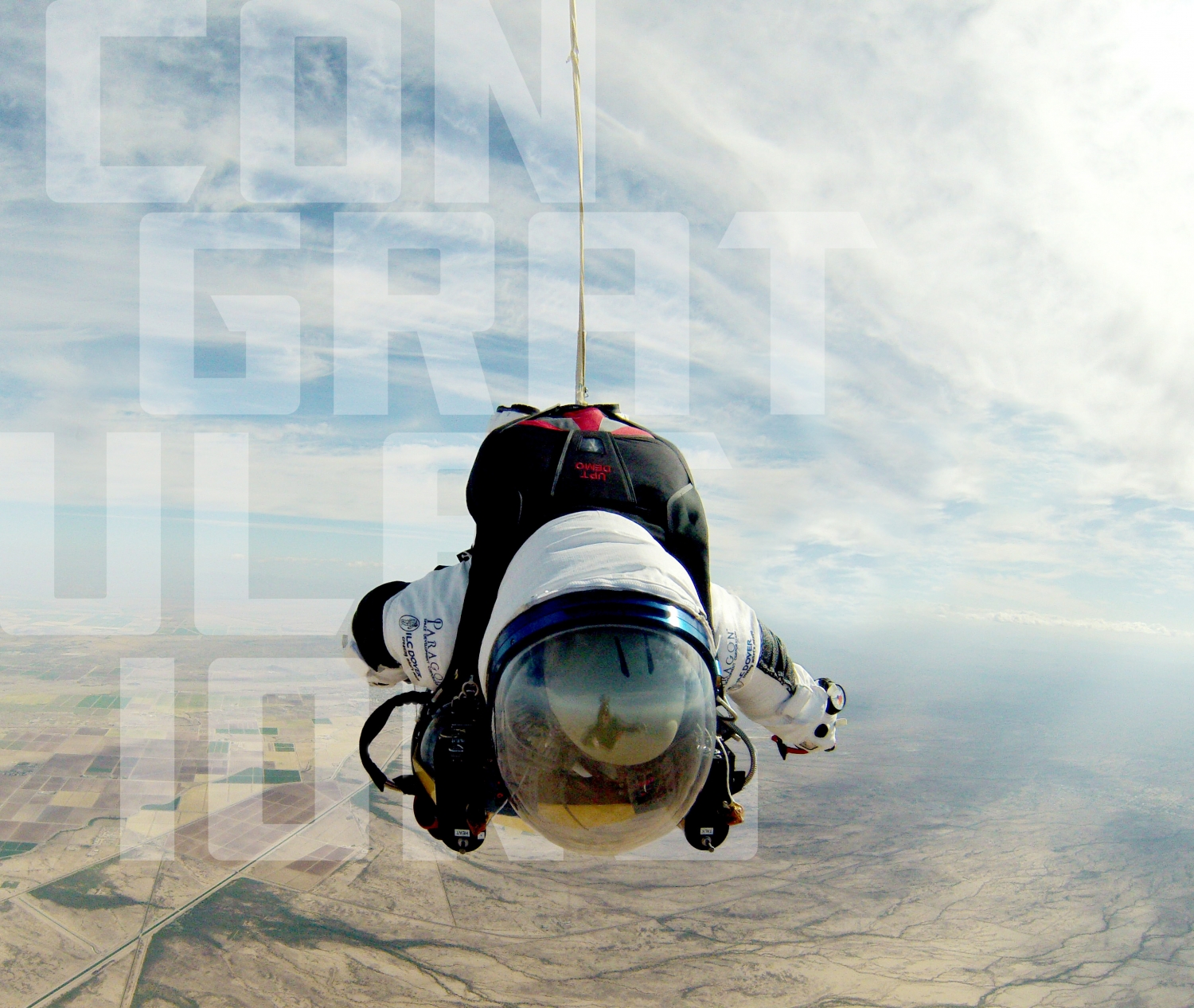 If you look closely, you can actually see Blikkies in the reflection of Alan’s suit!